The Ides of DEF CON is a multi player Role Playing Game (RPG) that takes place over a private, AES encrypted 915Mhz Radio network at DEF CON 25. To play, you must have a badge. You can buy one, or build one using the plans on this site.

Badges are aware of other badges and ping their status to the network approximately once every three seconds. 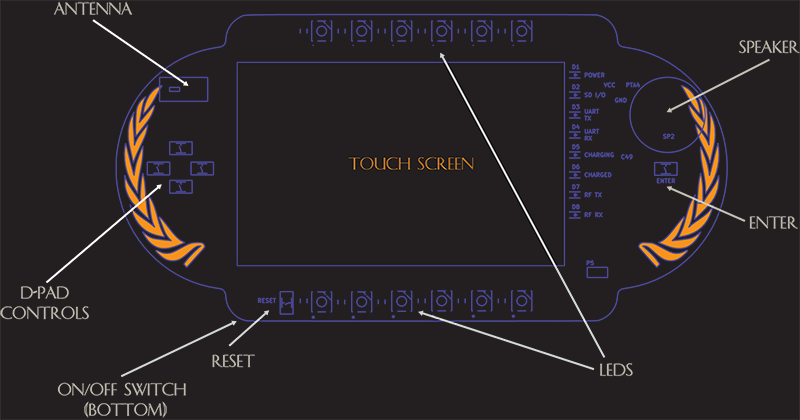 Battle begins when two characters decide to fight each other by starting a battle over the radio network. This is done by tapping FIGHT from the launcher or by tapping the swords icon at the bottom of the main badge display. Then, select an enemy to battle by tapping ATTACK.

Battle progresses in a turn-by-turn basis, with each player selecting HIGH, MIDDLE, or LOW attacks and then damage is calculated at the end of the round. It continues until one player dies or stops making moves.

If you stop making moves the battle will time out, and the fight will exit with any accumulated damage. Neither player will gain XP if you time out.

To attack your opponent, wait until the game says "CHOOSE ATTACK!" and either tap on the arrows, your opponent's character, or make a move on the D-pad by pressing Up for a HIGH attack, Right for a MIDDLE attack, or Down for a LOW attack.

You can also use the D-Pad and ENTER button to navigate through menus when not playing the game.

The LEDs around the outside of the screen will show how much time you have left before the round times out. You must make a move before the clock expires or the battle will end.

Once you make a move, the LEDs will change color to represent the remaining hit points you and your opponent have. Your character's HP is always displayed on the top six LEDs in in Orange. Your opponent's HP is on the bottom LEDs in Blue.

As this badge is an exposed PCB, try not to cover the antenna, or touch any exposed metal on the PCB. Doing so will impact the game.

Pro-tip: You can wear the badge in landscape or portrait orientation!

Go into the settings page and enable the 'Rotate badge' checkbox, then hit "save". Then, move the Lanyard clips to the top hole of the badge. Rotation only impacts the default badge screen. The fight screens and all other screens are always in landscape orientation.

Players start at LEVEL 1 with 70 HP, 0 XP, and MIGHT and AGILITY set to the default for the character class they have selected, as follows:

You cannot change your class once you start playing.

Your MAX HP increases with each level you attain.

When you win or lose, you gain XP. Reaching certain XP levels increases your character's level. On a win, an XP factor is applied depending on the level of the character you are fighting. If the character is substantially higher than you, you gain more XP. If lower, you don't get as much XP as a normal fight.

To calculate the XP Factor, first determine the difference between you and the enemy.

We use this value to get the XP Gain Factor, which is calculated as follows:

As you gain more and more XP, you will advance through levels.

No further advancement is available after level 10, and the game has been designed such that it should take about 50 wins to get to level 10 at about 5 wins/level.

When you level up, you can add a point to either Agility or Might.
You can only choose once per level and cannot reallocate points.

On every turn , you can pick a HIGH, MIDDLE, or LOW attack.

The color shown on the results screen (shown after both players move) shows you the sucess of your attack. Damage is random, and modified based on your chosen attack and AGL/MIGHT values.

Critical Hit - All characters have a 20% chance of doing a critical hit on each turn which will double your damage to your enemy. This chance can be as high as 40% if you have the LUCK unlock.

Damage is calculated by the following formula at the end of a turn:

Caesar - If you are a senator and you are attacking Caesar, a bonus multiplier of 2 X damage will be applied.

When a turn is ends, damage will be shown and the HP bars updated. If no one is dead, you will be returned to to the move select screen. This will continue in a loop until someone runs out of hit points.

When someone dies, XP will be granted and if either user has reached a new Level, the upgrade screen will be shown where a player can upgrade their Agility or Might points.

In the event that you both are dead, then the game will take overkill into account. The person with the least amount of hitpoints will lose. In the event that this results in a second tie, the person who initiated the fight wins.

Healing occurs only on the BADGE screen. This is the default screen with your character and stats.

It takes approximately 20 seconds to heal to full health, regardless of level. If you have the unlock for FAST HEAL you will heal in 10 seconds.

If you have been randomly chosen to be Casear, you cannot heal, and must fight to the finish to revert back to your original character.

Once you have reached Level III (3) you are eligible to become Caesar, which will occur during a random "election". When Caesar is activated you will have 3X the hit points of your base level, but you will not be able to heal! You will also gain 2X XP for any win.

When fighting Senators, Senators deal two times damage to Caesar. It will take multiple fights, to kill a character who is Caesar.

You know what to do! Gang up and take him out, Ides of March style.

When you die as Caesar, you will be reverted back to your original (permanent) class and your health will be fully restored.

If you kill someone who is Caesar, you will earn at least two times normal XP. ( +1 XP Factor — see the table above.)

Starting combat puts your badge into an in-combat state. Other players cannot fight you while you are in combat, and some badge features (like radio chat) are disabled during this time. You will also not appear on other badges' 'Select a Challenger' screens.

Combat is released when you die, exit a battle, or reboot. You may not be visible on other players badges for a couple seconds (until your badge pings again) after a fight.

A number of unlocks are available that will modify the game. You can find them or be granted them by super users who have black badges.

There are also secret characters in the game to unlock! Playing them starts you at 1.5X HP.

Thanks for playing the IDES OF DEF CON. We hope you love the game as much as we do!